Trending
You are at:Home»Cool Stuff»I can vouch for this, Finns LOVE saunas. Maybe even a little too much. :P 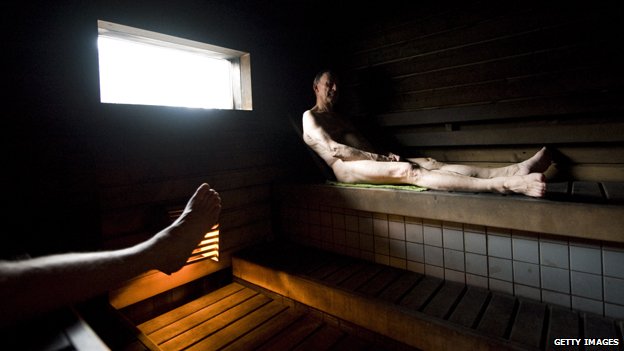 The only Finnish word to make it into everyday English is “sauna”. But what it is, and how much it means to Finns, is often misunderstood – and it’s definitely not about flirtation or sex.

In a dimly lit wood panelled room, naked men sit in silence, sweating. One beats himself repeatedly with birch branches. Another stands, takes a ladle of water and carefully pours it over the heated stones of the stove in the corner.

There is a hissing noise.

Within seconds a wave of moist heat creeps up around your ankles and over your legs before enveloping your whole body. Your pores open up and sweat covers you from head to toe.

This bathing ritual has been performed across Finland for thousands of years, ever since the first settlers dug a ditch in the ground and heated a pile of stones. Water was thrown on the hot stones to give off a vapour known as loyly.

Each sauna is considered to have its own character and its own distinctive loyly. The better the loyly, the more enjoyable the sauna. 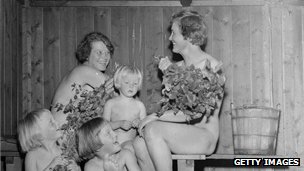 “An invigorating bath originating in Finland in which the bather is subjected to hot steam, usually followed by a cold plunge or by being lightly beaten with birch twigs” – Collins Dictionary

The OED dates its first use in English to 1881 in travel writer Paul Belloni Du Chaillu’s The Land of the Midnight Sun: “One of the most characteristic institutions of the country is the Sauna.”

For those working in the fields in harsh conditions, the sauna provided welcome relief to wash and soothe aching muscles.

These warm wooden rooms could be used at lower temperatures too, and were at the heart of the major events of a Finn’s life.

Women gave birth in them because the walls of traditional smoke saunas were lined with naturally bacteria-resistant soot, making them the cleanest room in the house.

Saunas were also the place for purification rituals before marriage, and the bodies of the dead were washed and prepared for burial on the wooden benches.

For many Finns the sauna was the holiest room in the house and the one most closely associated with their wellbeing.

“Finns say the sauna is a poor man’s pharmacy,” says Pekka Niemi, a 54-year-old from Helsinki, who spends about three hours a day in the sauna, six days a week. “If a sick person is not cured by tar, spirits or sauna, then they will die,” he adds, quoting a Finnish proverb. (“Spirits” here means strong alcohol, while tar was historically used as an antiseptic.)

Today, Finland is a nation of 5.3 million people and 3.3 million saunas, found in homes, offices, factories, sports centres, hotels, ships and deep below the ground in mines.

While Pekka Niemi’s sauna habit may be exceptional, 99% of Finns take at least one a week, and much more when they visit their summer cottage in the countryside. Here the pattern of life tends to revolve around the sauna, and a nearby lake used for cooling off.

Don’t imagine, though, that the sauna is purely a place for fun and games. It certainly would not have been in times gone by.

“Children were taught to behave in a sauna as if they were in church,” says Jarmo Lehtola approvingly. He is from Saunaseura, the Finnish Sauna Society, an organisation dedicated to upholding and preserving traditional sauna culture.

Founded in 1937, this private club of 4,200 members is based on an island a 15-minute bus ride from central Helsinki. Surrounded by a silver birch forest, it overlooks the tranquil Baltic Sea.

A sign on the front door instructs you to switch off your mobile phone.