Occupy was right: capitalism has failed the world

One of the slogans of the 2011 Occupy protests was ‘capitalism isn’t working’. Now, in an epic, groundbreaking new book, French economist Thomas Piketty explains why they’re right 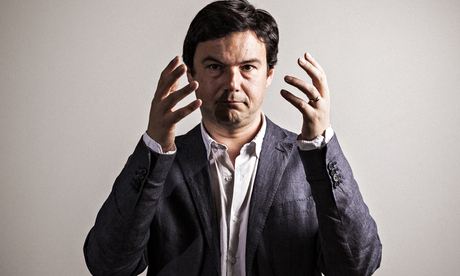 French economist Thomas Piketty, author of Capital in the Twenty-First Century. ‘I am not political.’ Photograph: Ed Alcock for the Observer

The École d’économie de Paris (the Paris School of Economics) is actually situated in the most un-Parisian part of the city. It is on the boulevard Jourdan in the lower end of the 14th arrondissement, bordered on one side by the Parc Montsouris. Unlike most French parks, there is a distinct lack of Gallic order here; in fact, with lakes, open spaces, and its greedy and inquisitive ducks, you could very easily be in a park in any British city. The campus of the Paris School of Economics, however, looks unmistakably and reassuringly like nearly all French university campuses. That is to say, it is grey, dull and broken down, the corridors smelling vaguely of cabbage. This is where I have arranged an interview with Professor Thomas Piketty, a modest young Frenchman (he is in his early 40s), who has spent most of his career in archives and collecting data, but is just about to emerge as the most important thinker of his generation – as the Yale academic Jacob Hacker put it, a free thinker and a democrat who is no less than “an Alexis de Tocqueville for the 21st century”.

This is on account of his latest work, which is called Capital in the Twenty-First Century. This is a huge book, more than 700 pages long, dense with footnotes, graphs and mathematical formulae. At first sight it is unashamedly an academic tome and seems both daunting and incomprehensible. In recent weeks and months the book has however set off fierce debates in the United States about the dynamics of capitalism, and especially the apparently unstoppable rise of the tiny elite that controls more and more of the world’s wealth. In non-specialist blogs and websites across America, it has ignited arguments about power and money, questioning the myth at the very heart of American life – that capitalism improves the quality of life for everyone. This is just not so, says Piketty, and he makes his case in a clear and rigorous manner that debunks everything that capitalists believe about the ethical status of making money.

The groundbreaking status of the book was recognised by a recent long essay in the New Yorker in which Branko Milanovic, a former senior economist at the World Bank, was quoted as describing Piketty’s volume as “one of the watershed books in economic thinking”. In the same vein, a writer in theEconomist reported that Piketty’s work fundamentally rewrote 200 years of economic thinking on inequality. In short, the arguments have centred on two poles: the first is a tradition that begins with Karl Marx, who believed that capitalism would self-destruct in the endless pursuit of diminishing profit returns. At the opposite end of the spectrum is the work of Simon Kuznets, who won a Nobel prize in 1971 and who made the case that the inequality gap inevitably grows smaller as economies develop and become sophisticated.

Piketty says that neither of these arguments stand up to the evidence he has accumulated. More to the point, he demonstrates that there is no reason to believe that capitalism can ever solve the problem of inequality, which he insists is getting worse rather than better. From the banking crisis of 2008 to the Occupy movement of 2011, this much has been intuited by ordinary people. The singular significance of his book is that it proves “scientifically” that this intuition is correct. This is why his book has crossed over into the mainstream – it says what many people have already been thinking.

“I did deliberately aim the book at the general reader,” says Piketty as we begin our conversation, “and although it is obviously a book which can be read by specialists too, I wanted the information here to be made clear to everyone who wants to read it.’ And indeed it has to said thatCapital in the Twenty-First Century is surprisingly readable. It is packed with anecdotes and literary references that illuminate the narrative. It also helps that it is fluently translated by Arthur Goldhammer, a literary stylist who has tackled the work of the likes of Albert Camus. But even so, as I note that Piketty’s bookshelves are lined with such headache-inducing titles as The Principles of Microeconomics and The Political Influence of Keynesianism, simple folk like me still need some help here. So I asked him the most obvious question I could: what is the big idea behind this book?

“I began with a straightforward research problematic,” he says in elegant French-accented English. “I began to wonder a few years ago where was the hard data behind all the theories about inequality, from Marx to David Ricardo (the 19th-century English economist and advocate of free trade) and more contemporary thinkers. I started with Britain and America and I discovered that there wasn’t much at all. And then I discovered that the data that did exist contradicted nearly all of the theories including Marx and Ricardo. And then I started to look at other countries and I saw a pattern beginning to emerge, which is that capital, and the money that it produces, accumulates faster than growth in capital societies. And this pattern, which we last saw in the 19th century, has become even more predominant since the 1980s when controls on capital were lifted in many rich countries.”

So, Piketty’s thesis, supported by his extensive research, is that financial inequality in the 21st century is on the rise, and accelerating at a very dangerous pace. For one thing, this changes the way we look at the past. We already knew that the end of capitalism predicted by Marx never happened – and that even by the time of the Russian revolution of 1917, wages across the rest of Europe were already on the rise. We also knew that Russia was anyway the most undeveloped country in Europe and it was for this reason that communism took root there. Piketty goes on to point out, however, that only the varying crises of the 20th century – mainly two world wars – prevented the steady growth of wealth by temporarily and artificially levelling out inequality. Contrary to our perceived perception of the 20th century as an age in which inequality was eroded, in real terms it was always on the rise.

In the 21st century, this is not only the case in the so-called “rich” countries – the US, the UK and western Europe – but also in Russia, China and other countries which are emerging from a phase of development. The real danger is that if this process is not arrested, poverty will increase at the same rate and, Piketty argues, we may well find that the 21st century will be a century of greater inequality, and therefore greater social discord, than the 19th century.

As he explains his ideas to me with formulae and theorems, it still sounds a little too technical (I am someone who struggled with O-level maths). But by listening carefully to Piketty (he is clearly a good and patient teacher) and by breaking it down into bite-sized chunks it does all start to make sense. For this beginner he explains that income is a flow – it moves and can grow and change according to output. Capital is a stock – its wealth comes from what has been accumulated “in all prior years combined”. It’s a bit like the difference between an overdraft and a mortgage, and if you don’t ever get to own your house you’ll never have any stock and always be poor.