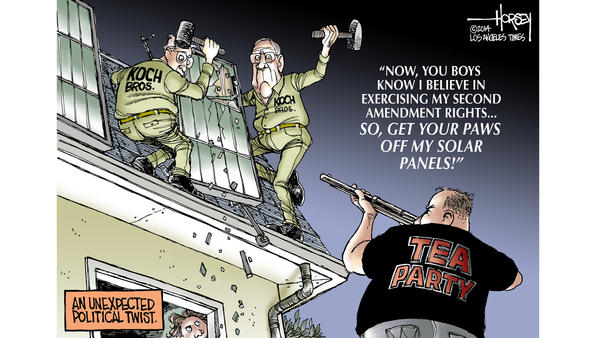 David Horsey
May 2, 2014, 11:30 a.m.
In their quest to cripple solar power and protect the profits of their fossil fuels-based businesses, the Koch brothers have run into an unexpected and potent adversary: tea party conservatives.
Recently, I wrote about how the billionaire Koch boys, conservative state legislators and big utilities are leading the charge in several states to force private citizens with solar panels on their homes to pay extra fees to be connected to the power grid. At the time it looked as if they had won a big victory in Oklahoma, where the Republican-dominated Legislature passed a bill authorizing just such a fee scheme.
It turns out all the hard work of the anti-solar forces was immediately blunted by an executive order issued by Gov. Mary Fallin. The order directs the state energy commission to impose solar fees only as a last resort and to continue making expansion of solar power a priority.
The question is how a Republican governor in a deep red state can go against the Kochs, the most notable financial contributors to right wing causes in the country. The answer is that among the thousands of people who are installing solar panels on their roofs (at an estimated rate of one new system every four minutes) are a whole bunch of independent-minded folks with strong libertarian impulses. They may or may not belong to the tea party, but they want to be able to fend for themselves without big government or big business telling them what they can and can’t do.
To these conservative-minded citizens, the extra fee being pushed by the Kochs and the utilities is the worst thing in the world: a tax.
“Monopoly utilities want to extinguish the independent rooftop solar market in America to protect their socialist control of how we get our electricity.” That assertion comes from the website of a group named TUSK, or Tell Utilities Solar Won’t Be Killed. It is a coalition of conservatives led by former California Congressman Barry Goldwater Jr. that, so far, has been very successful in beating back the energy industry attack.
Their next big fight may be in Arizona, where Goldwater’s father, the former senator and Republican presidential candidate, is venerated. There the utilities have managed to get a monthly $5 fee — or tax — slapped on the bills of ratepayers with home solar units. But the state’s largest utility company, Arizona Public Service, one of the many holdings of Pinnacle West Capital Corp., wanted so much more. They had sought a fee of $50 to $100 but got into trouble themselves by conducting a surreptitious campaign against solar users funded by “dark money” and then repeatedly lying about what they were up to. The Koch brothers are alleged to be among the sources of the mysterious funding.