Trending
You are at:Home»In the News»The brother of a British suicide bomber speaks…

My brother, the suicide bomber: why British men go to Syria

Waheed was an ordinary boy who played football and loved sci-fi movies. This year, he blew himself up in Aleppo. Abu Jamal left to join the jihadis. Tauqir is an aid worker who can never come home. This is the story of Britons risking their lives in Syria, and the families left behind 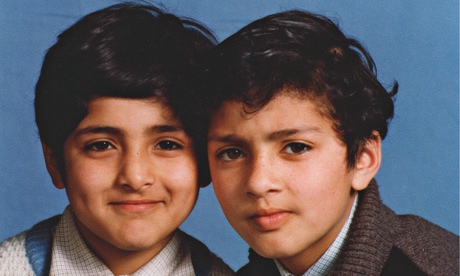 ‘How can Waheed be called a terrorist? He gave his life to save people’: Waheed (left) with his brother Hafeez as boys. Photograph courtesy of the Majeed family

The last time Abdul Waheed Majeed spoke to his family, it was on a crackling telephone line from Syria at the end of January. He had arrived six months earlier on an aid convoy organised by his local mosque in Crawley, and had been working in refugee camps along the Syrian-Turkish border, laying pipes and delivering food to those displaced by a grinding civil war.

Waheed told his family that he missed them all very much and loved them, and thanked them for looking out for his three teenage children and wife. His father, Abdul, was perplexed by his youngest son’s vagueness about when he would return and insisted on getting a date out of him. Waheed said he’d be back by April.

But he never came back. Six days later Waheed, at 41, became the first British suicide bomber in Syria and the 10th UK national to die on the Syrian battlefield. Since that last call home, Waheed had joined the al-Qaida offshoot Jabhat al-Nusra, fighting against Bashar al-Assad.

He had driven HGVs for two decades in Britain in his job with the Highways Agency. Now he got into an armoured dump truck laden with explosives and slammed into the gates of Aleppo central prison, alleged to be a torture chamber for 4,000 imprisoned rebels. Waheed’s mission hit its mark. Hundreds of prisoners escaped, but 300 people died in the ensuing firefight between the Syrian air force and the rebels. In the competitive world of performance terrorism, al-Nusra released a 43-minute video showing the truck’s journey, to publicise its triumph.

Over cups of tea in Crawley, the West Sussex town where the Majeeds have lived for decades, Waheed’s elder brother Hafeez says they missed the clues in his last call. “With hindsight, we should have sat up when he said, ‘I love you guys and look after the children.’ But we just wanted him home.”

A day after the attack, the news on Twitter was that the bomber was British. Waheed’s wife Tahmina rang a few of the women she knew whose husbands were in Syria, and they said he had joined al-Nusra. “But we had no concrete proof. Frank Gardner [the BBC’s security editor]said on the news that the bomber’s name was Abu Suleiman al-Britani. We didn’t know the name. It was only when the video was released three days later that we saw him.”